As most of us know, the FJ Cruiser has a pathetic fuel capacity of 19 Gallons. While that’s OK for some, others, like myself, have heavy trucks, full of armor, batteries, fridges, 35″ tires, bumpers and other things that reduce fuel economy dramatically.
My fuel light comes on, and will take about 15 gallons to fill back up from there. Multiply that by 12mpg, and that gives me about 180 miles, best case scenario.
That sucks.

So what if there was an affordable solution, that allowed one to gain about 5 gallons of usable capacity, in my case 60 miles, or about an hour of highway driving?

Sure, I carry extra gas in 2 Scepter cans on my Metaltech RedEye II, and I can carry another 2 cans on my roof rack, but that would still mean I have to stop.
The difference between a driving range of 2.5 hours to 3.5 hours is a considerable difference on longer trips.

Of course, you say, there are Man-A-Fre tanks, that give you another 19 gallons to transfer into the main, and Longrange as well as Long Ranger in Australia have aux fuel offerings. Why reinvent the wheel?
Simple. We wanted OEM parts, and just enough additional capacity to make a difference. Not circumvent the world without refueling. Besides, there are enough gas stations in our normal area of operations to not need so much.

The plan: I came to the realization that the FJ Cruiser was based on the Prado 120 frame, just like the 4th gen 4Runner and Lexus GX470. One could assume that if the Prado 120 frame was used, frame mounted accessories like fuel tanks and such could be transferred between the two. Or could it? Only one way to find out…

I ordered a 4th Gen 4 Runner tank from a salvage yard on eBay. It arrived and appeared to be in pretty darn good shape. A few replacement parts were ordered, like spare fuel pump retainer ring, O-rings and beer was stocked up, and Scott Kroeger and myself decided to make the EvilFJ the Guinea Pig. The stock FJ Cruiser tank came off rather easily, and the 4Runner tank was lifted up….to not fit. 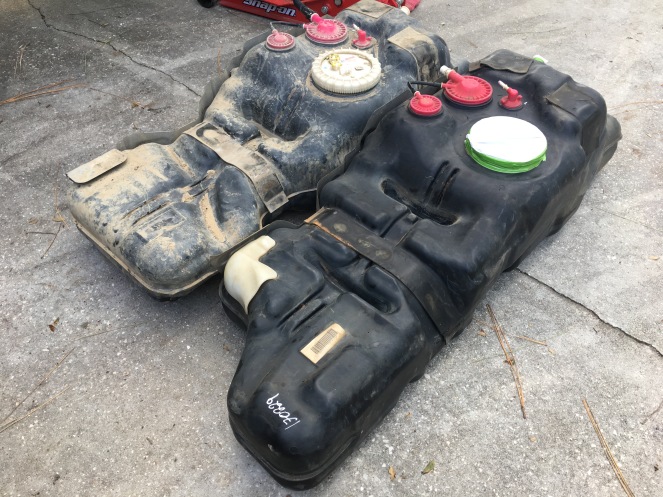 The FJ’s tank and 4Runner tank. 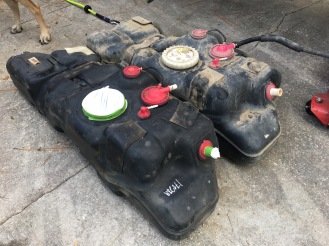 The back end is identical,

The front is thicker and wider. 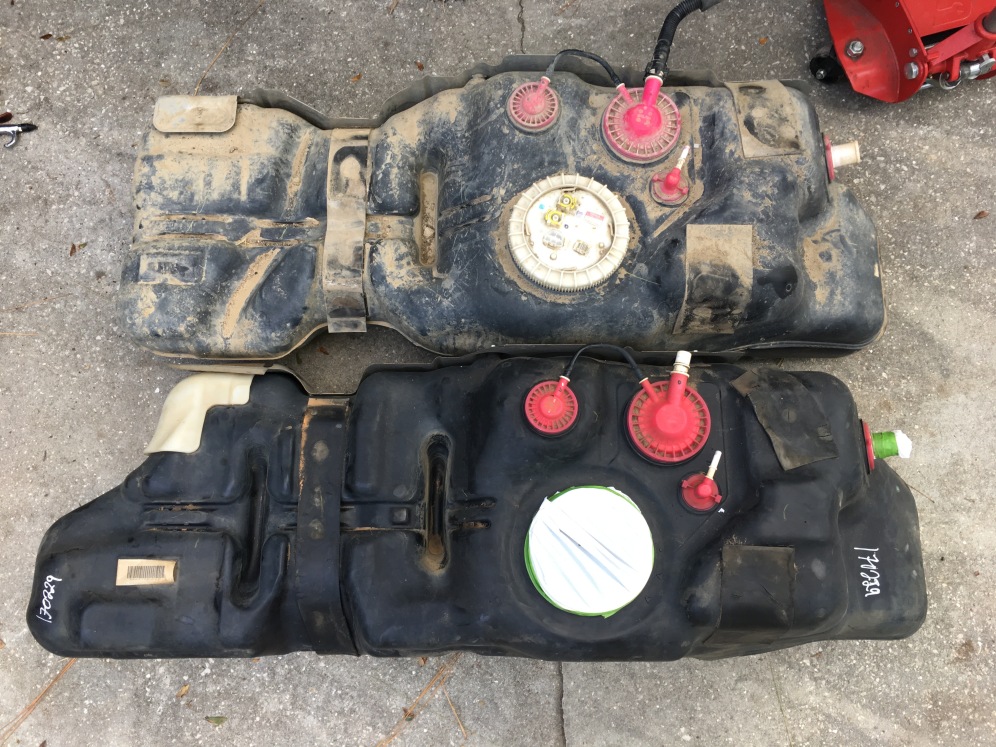 Here the outline can be compared.

We dropped it back down, and took some measurements. The distance between the mounting straps was about 2″ more on the 4Runner/GX470 tank, causing a major mounting issue. The front would not sit all the way up over the Trail-Gear transfer case skid I have, and because of this the rear would bind up terribly on the eLocker and coil spring.
The only option we saw was to cut the crossmember the FJ Cruiser front strap hangs from and weld it 2″ further forward, but that would also mess up the exhaust hangar, and defeat the purpose of a “drop-in” upgrade.

Here the length difference can be seen, almost 4″

The hangup, the 4Runner tank does not have the cutout in it for this crossmember.

So, the question is, if all of these are Prado 120 frames, why are they different? As suspension components are the same, I looked up the wheelbases on the common Prado 120 trucks to look for frame differences, and found the following:

This shows the FJ Cruiser having a shorter wheelbase of 4″ compared to the rest of the 120 fleet, which would, in my opinion come from the difference in frames – regardless of being 120 based. A 4″ frame stretch on a GX470 gives you all the room in the world to fit a 24 gallon tank. 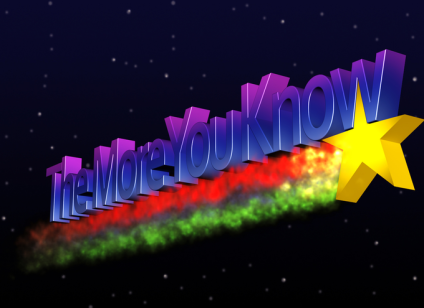 I haven’t given up yet…. I’m going a different avenue in my battle for more usable fuel on a budget…. stay tuned!

Meanwhile, my friend Mark Hawley from Metaltech 4×4, nice guy and “Been there tried that” guru of the US Toyota 4×4 market, gave me the following feedback on Facebook:

“Quite a bit of experience with all this. In 2011 the Metal-tech 4X4 FJC was loaned to the #1 aftermarket fuel tank manufacturer in the US. We worked with them trying to build a #1 Safe Solution #2 one that would not code out.
Building a larger tank #1 is not just building a bigger box. It has to survive in an accident. Front end collisions is what happens the most and its the hydro-static shock of the wave of fuel hitting the front of the tank that blows most aftermarket/home tank’s front walls out.

This company had a vertical sled they tested their and competitors tanks on. Half full of water, they drop the tank in a yolk that suddenly stops, the water would blow most fronts off the tanks. OK good fabrication can design for that. Check. #2 the biggest issue is the emissions.
The emission system is engineered to work for a specific volume of gas vapor that can be produced from the stock tank. Even after you build the perfict larger tank you now have to get the emission system to work with the added volume of gas vapor. The stock charcoal canister is not big enough. SO an 2nd stock unit at crazy $$ was added, still no joy.
Turns out the size of the vent hoses could only allow X amount of vapor to move though them. Ok add second set of vapor hoses to the 2nd charcoal canister. BY the time all the extra lines were added, the system would run clean. However it would not pass the toughest “hot box” test in the US, California emissions.
The truck with 1/3 tank of fuel had to be parked in a sealed test chamber for a week. No leaks of the vent system was allowed and it could not pass this test. So the added 8 gallon tank that would cost $1400’ish + $1K in OEM parts could not pass so the whole project was scrapped.
I then designed a better rear bumper that could carry 10.5 Gallons of fuel.”